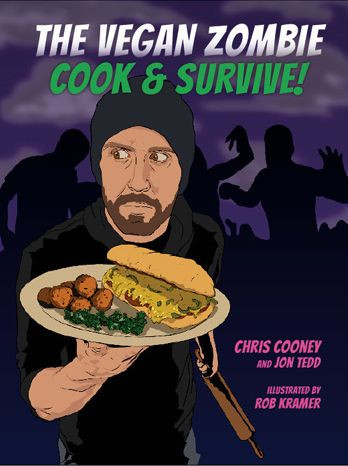 - Step-by-step, easy to follow instructions
- easy to find ingredients
- suitable for all levels of cooking experience
- with American & Metric measurements

From the world-famous creators of the mega-popular YouTube cooking video channel The Vegan Zombie!

Shotgun? Check. Med kit? Check. Underground bunker stocked with soy jerky, almond butter, & nutritional yeast? Double check. Ready for the zombie apocalypse? Almost. We'll only be fully, absolutely prepared with The Vegan Zombie Cookbook!”
– Terry Hope Romero, best-selling author of Veganomicon, Vegan Eats World, Viva Vegan!
"The Vegan Zombie devours the scenery with a lively blend of comedy, horror and epically delish vegan food porn. If the zombie apocalypse goes down, I want to be side by side with this superfood superhero with cleaver and melon baller in hand."
– Jason Wrobel, Celebrity Vegan Chef & Cooking Channel host of How to Live to 100

"With a myriad of original and delicious dishes, plus a touch of their post-apocalyptic world, you can count on some of the best – and easiest – vegan recipes you'll ever make."
– Kristin Lajeunesse, Will Travel for Vegan Food

"The Vegan Zombie, besides being amazingly entertaining and funny, make vegan cooking easy, straight forward and manageable for even the busiest of people – like myself! The recipes are one of a kind and open viewer's eyes to how delicious and simple vegan cooking can be."
– Jessie Williams, EatPastry


"The Vegan Zombie cookbook is a dream come true! Jon, Chris & Indy have proven that plant-based food can be mouth-watering, easy to prepare and a lot of fun. They already inspire thousands of men, women and children to get into the kitchen to whip up compassionate cuisine, so I can only imagine how many lives this book will change (and save) ...except for the living dead, but they don't really count."
– Whitney, Eco-Vegan Gal


"The Vegan Zombie is absolutely, hands down my favorite vegan cooking show on the planet. Jon and Chris are masters of deliciousness, creativity and charm. They constantly deliver pure magic with a giant side of amusement. I can't wait to get my grubby, turmeric-stained hands on their illustrated cookbook, Cook & Survive."
– Justin P. Moore, The Lotus and the Artichoke